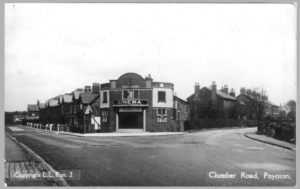 In 1982, Fr William Jukka, the parish priest at that time, compiled a “Silver Jubilee” booklet containing as much of the history of the development of this Catholic parish as he could discover. This booklet has been retyped and is available here as a PDF document. Our apologies for any remaining transcription errors.

This booklet says “The first cinema in Poynton had been opened in 1922. It was built by Mr Bailey on land that until then had been an orchard. It was situated at the junction of Clumber Road and the ‘new’ Bulkeley Road opened in 1902. In 1923 Mr Bailey constructed a small cottage next to the cinema with a shop attached to provide his patrons with sweets and tobacco. Together and enlarged they now form the Presbytery. The cinema proved so popular and profitable that Mr Bailey decided about 1937 to build a bigger and better one on London Road which he called the “Brookfield.” The old cinema was converted into St Paul’s church in 1940 and gained its first parish priest in September 1957.

The booklet is available in two forms; it is hoped that the history from 1982 will be compiled by parishioners in due course.

JOIN OUR PARISH: register your details to receive our weekly newsletter and other updates @ Registration form.

Monday - 9:30am Word and Communion service.
Join us in-person.

Wednesday - 9:30am Mass.
This live streamed Mass and prayers starts at 9:15am with prayers, followed by Mass at 9:30am. Join in person or on watch the live stream at @ Facebook live.

Friday - 9:30am Word and Communion service.
Join us in-person.

Saturday - 6:30pm Vigil Mass, held on each second Saturday of every month.
Join us in-person.

Sunday - 10:00am Mass.
Join us in-person or watch the live stream @ Facebook live

Donations to the Parish

To make a donation, or set up a Standing Order or Gift Aid for Offertory giving, click on: